Originally Posted On: 61 Percent Of Americans Would Rather Visit Yellowstone National Park Instead Of Disney Parks According To Survey By Camping Forge | Camping Tips From Camping Forge

Camping Forge surveyed 1500 Americans between the ages of 18 and 54 plus about camping. We wanted to know how they camped, where they liked to camp, what they enjoyed about the outdoors, and how they compared camping to other types of vacation.

Here is what we found out.

1) 61% Would Rather Visit Yellowstone Than Disney – Not only do we have our survey results, but actual visits to National Parks are double than visiting all of Disney before 2020.

2) 53% of Americans Would Prefer To Camp – Camping would seem to be the best post-pandemic vacation. You’re outside, can travel entirely in your own vehicle, it’s easy to social distance, and if you bring an RV, you can even avoid public restrooms.

3) 70% Want Their Marshmallows Toasted – We’ll admit, this is not a serious topic. But marshmallows are as synonymous with camping as tents. And most people don’t like their marshmallows in flames.

4) 43% Say Campfire Is Their Favorite Outdoor Smell – While most campers don’t need a campfire to stay warm or cook, they do love the smell of a campfire.

5) 34% Prefer To Camp In Summer – It shouldn’t be surprising that most people prefer to camp in summer. The temperature is warmer and it’s easier to coordinate kid’s schedules.

6) 28% Prefer To Camp At A National Park – There are 13,000 accessible campgrounds in the US but the most popular option is National Parks.

7) 44% Camp Twice A Year – The most popular option among campers is to camp twice a year.

8) 49% Prefer Sound Of Flowing Rivers – This stat surprised us but according to the survey the most popular sound was of flowing rivers. It surprised us because among our team of experienced campers we rarely camp near rivers.

9) 41% Considering Renting An RV – This was not surprising. Interest in RV camping has grown by 50% over the past 2 years. By November of 2020, according to the RV Industry Association (RVIA), 61 million Americans planned to camp in an RV.

10) 50% of Parents Plan To Camp More With Their Family In 2021 – Whether it’s feeling confident in the vaccines or being leery of alternative vacation options, many parents are ready to camp more frequently in 2021.

Let’s now look at these stats in more detail.

61% Would Rather Visit Yellowstone Than Disney

According to the 1500 people we surveyed, 61% would rather visit Yellowstone National Park than a Disney theme park.

This is also borne in the actual park statistics. For a better comparison, we looked at the 2019 attendance numbers, and twice as many people visited the National Parks than Disney theme parks.

Meanwhile, the 18-24 age demographic, it was a 50/50 split between Yellowstone and Disney/Other Amusement Parks. This would make sense since this is the age group who would most like to ride thrill rides.

53% of Americans Would Prefer To Camp

According to KOA, as recently as 2018, 78 million Americans went on a camping trip.

And camping has remained steady in popularity.

While many states have opened back up, hotel occupancy remains low.

When asked where they would like to stay per type of accommodation, resort hotel at 46% was the most popular.

However, combined camping was more popular.

Tent camping is cheaper, doesn’t require additional maintenance, is easier to store when you’re not camping and can be done almost anywhere. Marshmallows go with camping just like tents and campfires.

People like to roast marshmallows over a campfire as an individual sweet and to make S’Mores.

And most people (70%) prefer to have their marshmallows toasted instead of our family tradition of setting our marshmallows on fire. Then eating the burned marshmallow. When camping, there are many different smells to experience.

And the most popular, regardless of age or sex is a campfire.

However, as we were reviewing the stats, we discovered interesting differences in the people who chose coffee as their favorite smell.

The youngest age group (18-24) was the least likely to choose coffee as their favorite smell at 12%.

There were more distinct differences between men and women. In particular, in the 45-54 age range.

25% of men ages 45-54 said coffee was their favorite camping smell.

Meanwhile, in the same age range, only 8% of women said coffee was their favorite camping smell.

34% Prefer To Camp In Summer Camping is primarily a warm-weather endeavor. While, technically, people can camp in snow and cold weather, it requires specialized gear. And it’s much easier to get yourself in trouble such as slipping on ice or hypothermia.

Thus, it’s not surprising that 34% of those surveyed said they prefer to camp in summer.

However, when we looked into detail, the results provided more variability. In particular, among males.

However, once men turned 54, summer became the most popular option at 40%.

Women in ages 25-34, were the only female demographic who preferred fall over summer at 38%. Perhaps, this is the age group that most enjoys fall foliage.

45% of women who were 54 and older preferred summer camping.

28% Prefer To Camp At A National Park There are 13,000 accessible campgrounds in the US. In our survey, 28% said they would prefer to camp at a National Park.

There are 58 National Parks.

Here are additional breakdowns within the survey.

National Parks’ mission is to preserve the area as much as possible in pristine condition. Meanwhile, the National Forests’ mission is to support multiple uses including lumber, hunting, fishing.

However, as people get older the trend changes.

We believe this is because State Parks are closer to more people and thus require less travel time. 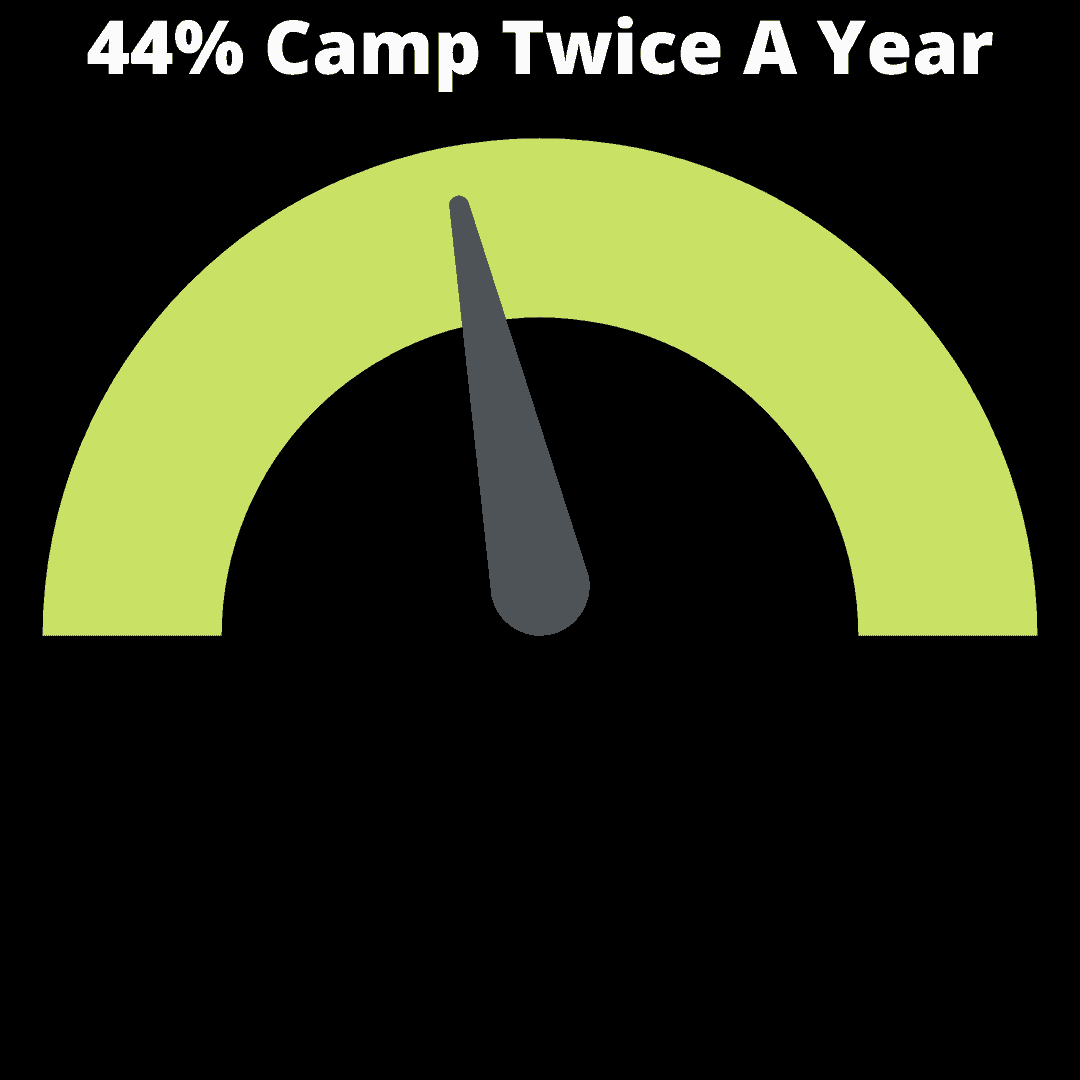 According to our survey, campers go camping on average, twice a year.

This was not surprising to us because in 2020 we surveyed 500 campers and asked them why they didn’t camp more often, the most common answer was “don’t have the time.”

One reason people don’t have enough time is that according to the Bureau of Labor Statistics paid time-off for the average worker is only 10 days. Plus as children return to school and resume extra-curricular activities, those activities will reduce the time available for camping.

Finally, we know from personal experience, unless people can go tent camping for at least two consecutive nights, it’s not worth the time to setup and takedown a tent campsite. RV, in particular, motorhomes are much faster to setup and tear-down a campsite with.

However, one demographic did say they camped more than twice a year:

49% Prefer Sound Of A River We asked the survey takers to select their favorite sound and 49% said flowing river. 41% of the 1500 people surveyed said they would consider renting an RV.

RV camping popularity exploded in the past few years. With especially strong growth in 2021.

For example, according to the RV Industry Association (RVIA) said that 61 million Americans planned to camp in an RV in 2021.

Outdoorsy, which is a marketplace that allows RV owners to rent out their RVs saw a 350% increase in rentals in 2020. Camping has been a popular hobby for many decades. On average, 40 million Americans camped each year prior to 2020.

But after 2020, it can be surprising to see that there’s a form of leisure activity that people would want to do more of.

Meanwhile, 43% of Females plan to camp the same amount as prior years.

Camping continues to remain popular. For some people, it’s their favorite hobby. For others, it’s the ideal way to go on holiday after the pandemic. And for others, it’s a way to see the country in retirement.

Camping Forge surveyed 1500 Americans between the ages of 18 and 54 plus using Pollfish.