DJI is a big name in the commercial drone market. A 2020 report from Droneii perfectly illustrates the sheer size of this drone behemoth as it managed to cover 70-80% of the global market. And now, the company is giving (another) crack at the FPV (First Person View) drone which is aptly called “DJI FPV”. We’d reported earlier about its leak which suggested a Q1 2021 launch. Let’s learn more about the DJI FPV drone including all the exciting features it’s packing, its expected price in Nepal, and more.

In a bid to deliver an immersive FPV experience, DJI has sacrificed the portability of this machine. Unlike other drones from the company, you can’t fold the FPV into something smaller. The propellers are removable though. Here, the DJI FPV weighs 795 grams including the propellers with a diagonal distance of 245mm. The company also says this design is aerodynamic and wind-resistant. Its landing legs are also equipped with customizable LEDs.

Moving on, the actual “FPV” promise of this drone is fulfilled by the DJI FPV Goggles V2. Looks like something pulled straight out of the Blade Runner universe. Anyway, these goggles alone retail for $569 which adds up to the entire combo costing $1299. Unlike other FPV drones, DJI is using digital signal for data transmission between the two devices—specifically to facilitate long-distance transmission. Yet, digital signals are traditionally slower than analog signals found in other FPV drones. To solve this problem to the best of its extent, this drone uses DJI’s O3 (OcuSync 3.0) technology.

With this, DJI is promising up to 10km of transmission range while the actual latency varies between different modes. Under the high-quality mode with 1440×810p videos, the latency is around 40ms. You can shoot either 60fps footage at 142º Field Of View (FOV) or 50fps videos at 150º FOV. For even reduced latency, you’d want to switch on the low-latency mode where the delay is as low as 28ms. 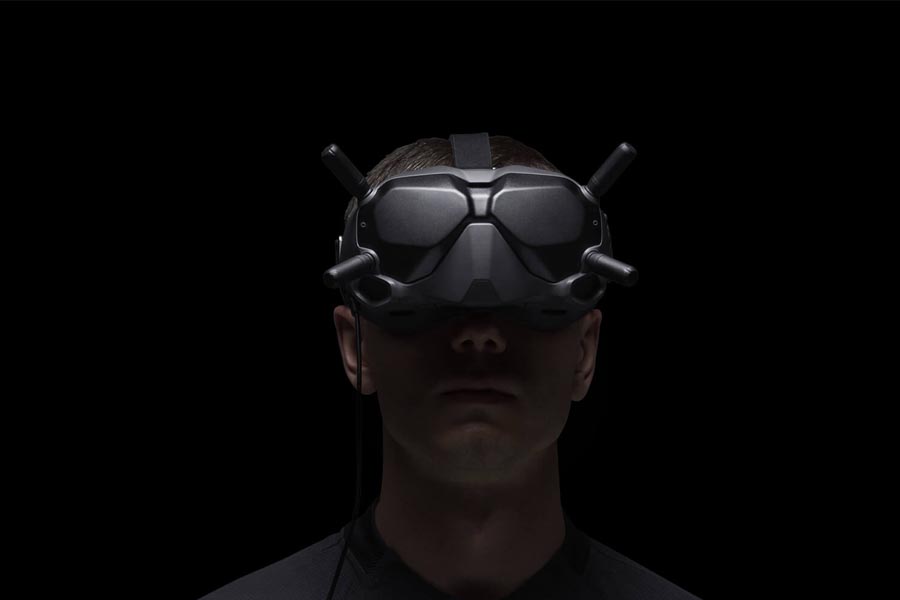 But this mode shoots slow-mo videos at either 100/120fps at 150º or 142º FOV respectively. The DJI FPV Goggles V2 is equipped with a 1800mAh battery with a rated backup of around 110 minutes. You can also connect up to 8 goggles together through which others can enjoy the drone pilot’s view too. For literal smooth sailing, the DJI FPV drone uses anti-interference technology and high-gain antennas. Plus, it also uses dual-frequency transmission (2.4/5.8GHz) with a bitrate of up to 50Mbps.

But the company suggests you use the 2.4GHz band most of the time since the other frequency band isn’t available in most regions of the world. In case there’s a signal loss between the two complementary devices, the DJI FPV has been programmed to automatically enable fail-safe RTH (Return To Home) mode. Its ADS-B (Automatic Dependent Surveillance-Broadcast) technology scans and receives flight location information from air units that transmit ADS-B signals so that you can avoid a possible collision.

To control the drone’s motion, this drone is bundled with DJI FPV Remote Controller (Mode 2). Retailing for $299, this is a conventional-style controller. At 765 grams, it houses a 4920mAh battery inside. 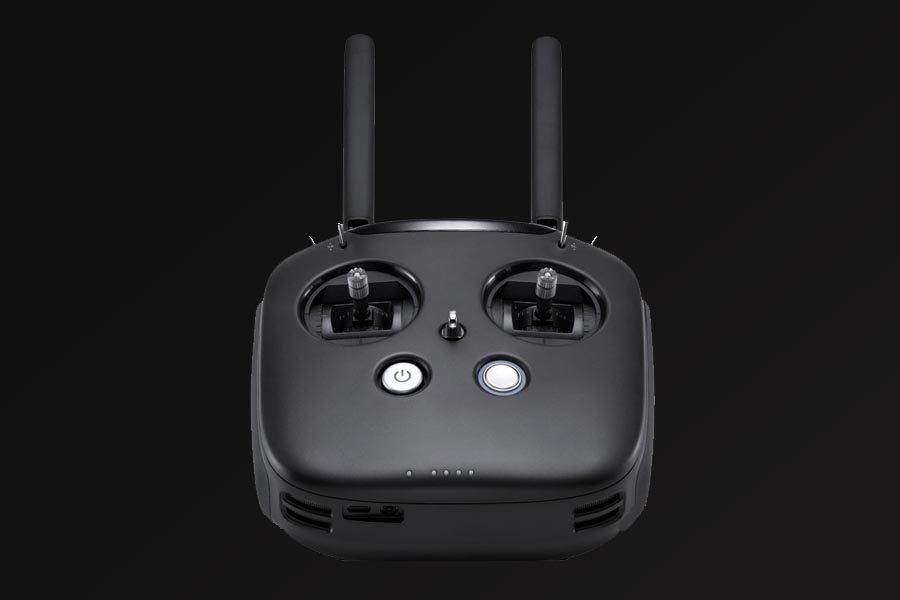 Oh, by the way, the battery in all components comes with this intelligent feature where they automatically drain the charge after a couple of days in order to expand the effective battery charge cycle. Regardless, syncing the controller and the drone lets you enjoy your actions reciprocated with a minimal delay of 7ms.

Now, if you want something funky to go with this FPV-capable drone, DJI is also introducing an optional motion controller. It requires a single hand to operate and lets you maneuver the drone with your hand’s movement. There’s a trigger button on the front for acceleration while a dedicated button on the top facilitates take-off and landing. DJI FPV’s fixed camera is controlled with the point controller mechanism where a central circle in the goggle’s console acts as the point of reference for flight controls. And just like on the regular remote controller, the motion controller also comes with a button for emergency brake and hover. With a single press of the button, you can (almost instantaneously) stop the drone while it hovers stably. This is an incredibly useful feature to prevent any gnarly accident against any and all surfaces.

Here, the DJI FPV comes with 3 different flight modes intended for different levels of users. Whether you’re a beginner or an enthusiast, the company wants you to embrace the fun of FPV drones. Starting off, the N (Normal) Mode is targeted at new users. It is restricted to traditional drone flight controls while embedding different safety-oriented features like obstacle sensing. Then there’s the S (Sport) Mode that combines manual control with a simplified control mechanism. And for the absolute pros, DJI lets you unlock the true potentials of this drone under the M (Manual) Mode. Unless you fit into the target demographics, you might one to steer clear of this one since all sensors and hovering features are effectively disabled here. While it’s typically not a racing drone, the DJI FPV could very well pass as one since it can hit up to 140 kph under M Mode. Impressively, takes just 2 seconds to go from 0-100 kph. Its single-axis (tilt) gimbal uses RockSteady EIS technology for stabilized recordings. In terms of resolution, 4K footages can be shot at either 50/60fps while you can shoot FHD 1080p videos at 50/60/100/120fps.

DJI FPV is now available for purchase where its price is $1,299. This includes the drone itself, Remote Controller 2, FPV Goggles V2, cables, and a battery. The DJI FPV Motion Controller is optional and costs $199. We expect the price of the DJI FPV drone kit in Nepal to be around NPR 180,000 when it launches later on.