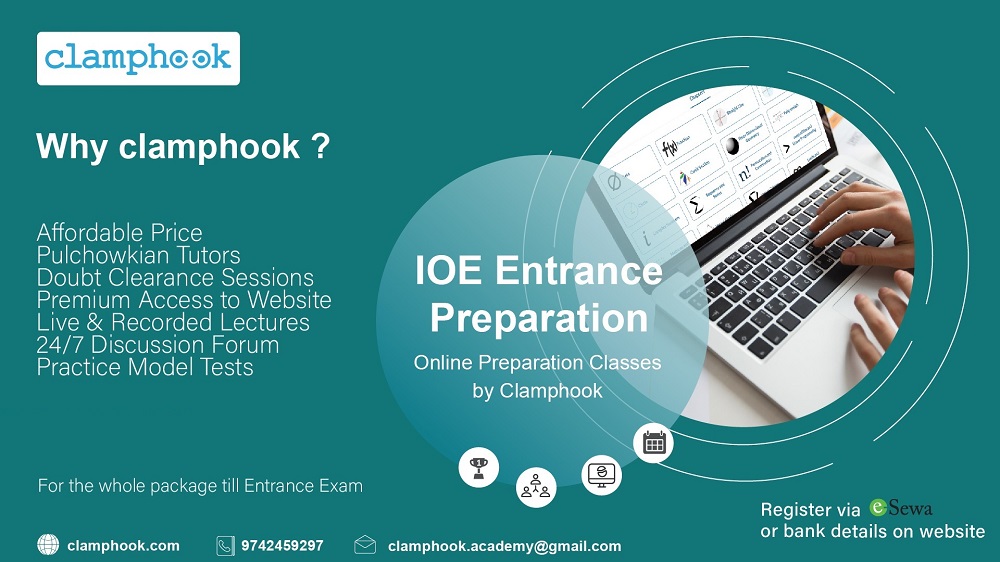 Bikki Chhantyal, a founding engineer at Clamphook Academy, says that in previous years, students from outside the Valley, especially those who did not get the right information about the entrance exams in time, lost the academic year of many talented students.

“Students from outside the Kathmandu Valley were obliged to come to Kathmandu immediately to prepare for the entrance exams for the undergraduate level by taking the Class XII examination. That has now been removed,” says Chhantyal.

Chhantyal claims that the online entrance exam class conducted by Clamphook is effective and accessible.

In order to make it accessible to the students without any financial burden, only Rs 6,000 has been earmarked for the entire course including all the facilities available from Clamp Hook.

The Clamphook Academy has stated that the fee for the entrance exam preparation class for engineering has been fixed at Rs 6,000.

“Eight or ten years ago, various institutes were charging over Rs 20,000 for an engineering entrance class,” said Chhantyal, founder of ClampHook. “We have been able to run 6,000 quality preparation classes through online classes.”

Clamphuk claims that the organization has been able to run the classroom at a minimal fee as the physical classroom requires house rent, classroom management costs and a large number of staff, and the cost of conducting online classes has been reduced.

“Now is the critical time of the epidemic. We have not paid attention to the profit of the organization,” says Chhantyal. “Many engineering friends are supporting Clamphook to make the entrance exam preparation class for engineering accessible.”

“All the teachers who take classes at Clamphuk are graduate engineers from Pulchowk and are studying engineering at the Pulchowk campus and are previous year’s IOE toppers,” said Chhantyal.

Biplav Gautam, another founding computer engineer, said that recorded classes will be made available along with live online classes.

Students are also provided with digital notes based on the syllabus of IOE entrance exams in Mathematics, Physics, Chemistry and English.

Students will be given a set of model question papers based on the questions received in the IOE Entrance from the previous year.

Students studying at Clamphook are offered a ‘Bikley Mock Test’ every Saturday. Similarly, students will be provided a ‘Discarded Platform’ to ask questions 24 hours a day.

More than 12,000 students take the IOE entrance exam every year for the 576 seats on the Pulchowk campus.

Apart from the Central Campus, Pulchowk, the students have to pass the examination on good merit in order to get admission in the private colleges including the four affiliated campuses under the Institute of Engineering Studies.