Remember when Microsoft said that Windows 10 would be the final version of the OS? Pepperidge Farm remembers! Well, the company has officially taken its word back as it unveiled Windows 11 in an event yesterday. Here, we will discuss the key takeaways of the new OS and its system requirements and rollout plan.

Let’s start with what we already knew about the OS before yesterday’s launch. Windows 11 has gone through a design makeover with the new look drawing inspirations from the now-reductant Windows 10X. This version of Windows is populated with rounded corners and a translucent, glassy effect. These design elements are uniform throughout the OS, including the Start Menu, Taskbar, and Widgets. Microsoft has introduced new transitions, startup sound, and redesigned the themes as well. Similarly, Windows 11 has fine-tuned light mode, dark mode, and contrast.

The first thing you will notice about the new Windows is the center-placed Start Menu. It may not seem that big of a change, but the Start menu can affect productivity, as it is where you will begin most of your works. The search bar at the top of the Start menu can give you results from the PC itself, OneDrive, and web. In fact, it has been optimized with Cloud and Microsoft 365. Thus, you will even be able to access your last-seen document from your smartphone straight from the Start menu.

Windows 11 is here to change the way you snap your apps to your screen. You can now hover the cursor over to the maximize button and choose the Snap Layouts of your choice. Microsoft has also introduced Snap Groups. These are the collection of recently used apps. Windows remembers the apps you were using, groups them, and places them on the Taskbar, so you won’t have to go through the hassle of setting everything up again. You can even switch these groups from the Taskbar, as you would do with apps.

If you use multiple monitors, you would be glad that you don’t need to reconfigure the screen layout. When you disconnect a secondary monitor, the windows resize accordingly. Similarly, when you reconnect the monitor, it will remember the past layout and restore it. With Windows 11, you won’t have a problem interacting with your PC without a keyboard. For 2-in-1 laptops, the space between the icons will widen when you detach the keyboard. Similarly, there are subtle visual cues and larger touch targets to help you move and resize windows more easily. You can even make use of gestures, as you would do with the precision touchpad. If you use a stylus, you will notice the new and improved haptics. Similarly, Microsoft has also improved the touch keyboard, which now supports multiple themes and swipe typing. Features like space as a cursor, emoji, and GIFs will make the keyboard look more like the one on your smartphone. In addition, Windows 11 adds auto punctuation to voice typing.

Moving on, the Widgets layer now slides over from the right side without interrupting what you have going on the screen. You even have the option to expand the layer to full screen. Windows Widgets has an AI-powered news feed tailored to your preferences. Here, you get to see the contents that you love. Loved something you see? You can even offer tips for creators to encourage them to keep posting.

The new Microsoft Store has been built from the ground up. Developers can bring any app to the store, whether it’s PWA, Win32, or UWP. Similarly, developers can use their own e-commerce engine for in-app purchases. Doing so will bring more profit as they no longer have to provide a cut to Microsoft. 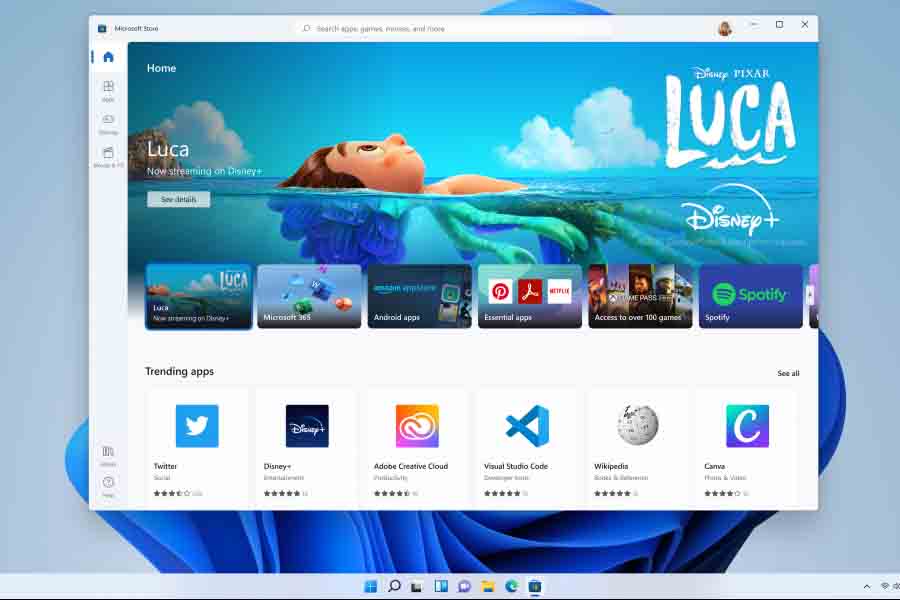 With Windows 11, users can head over to the Microsoft Store and download the Android app of their choice via Amazon Store. You can integrate them into the Start menu and Taskbar like any normal apps. 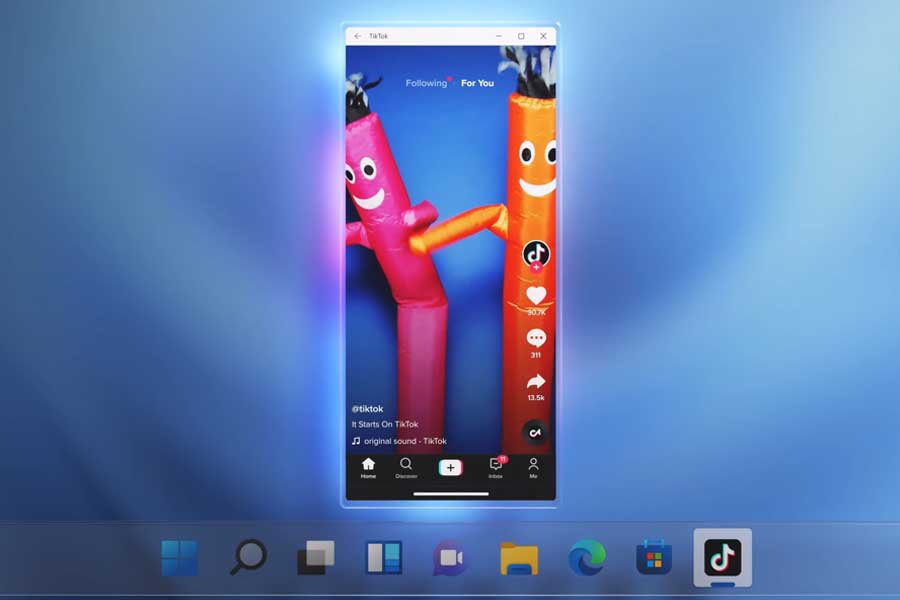 Here, Microsoft is using Intel Bridge technology to achieve this.

The entertainment tab offers different titles from multiple streaming services. You can enjoy these titles on a bigger screen using the wireless connect feature.

Microsoft says that browsers including Edge will run faster on Windows 11. Edge also features vertical tabs that reveal more information than the horizontal ones. In other news, Microsoft has integrated Teams into Windows. It is also promoting the go-to app to connect to friends and family. The app will replace Skype for Business Online, which will be retired on July 31.

For gamers, Windows 11 inherits several features from the latest Xbox consoles. For instance, Microsoft is promising vibrant colors and lightings effects in games with Auto HDR. To gamer’s delight, over a thousand different games will be able to benefit from it. The other feature is DirectStorage that will reduce the load times by loading the assets to the GPU. Windows 11 also comes with Xbox Game Pass built in to the Xbox app. However, you can also buy and enjoy individual games.

Microsoft also revealed that chip manufacturers like Qualcomm, Intel, and AMD were involved in Windows 11 development from the very start.

Thus, Windows 11 is not just a new theme on top of Windows 10. Windows 11-powered machines will have better battery life, faster wake-from-sleep time, and faster Windows Hello authentication. Microsoft did not bother with the details but claimed that Windows 11 is the most secure Windows platform ever.

Updates will be faster on Windows 11 too. They will also be 40% smaller and can run on background.

The early build of Windows 11 will be available starting next week as part of the Windows Insider Program. Windows 11 will not be publicly available until the Holiday season. Windows 10 machines that meet the requirement will get the update free. To see if your device supports Windows 11, you can also use the PC Health Check app (the download link is at the of the webpage).