Lately, Motorola has been trying to tap into the South Asian market. The brand made a comeback to the Nepali market last and has been updating the portfolio from time to time. Here, Moto E7 Power is the most affordable Motorola phone you could buy in Nepal. It packs some interesting features for an entry-level phone. In this review, I will be discussing all the good and bad aspects of the Motorola Moto E7 Power.

Let us start with the design and feel of the device. Moto E7 Power is quite sturdy, and it does not feel cheap despite having plastic as the principal material. Motorola has gone with this shiny matte finish that is good-looking and resistant to smudges and fingerprint marks.

On top of that, this one has an IP52 rating. While it doesn’t make the phone fully weatherproof, it’s better than having no protection at all which is common for phones at this price point.

You get a trio of buttons on the right side. The dedicated Google Assistant button and the power button have textures that distinguish them from each other, with the volume rocker between them.

Still, I would have liked if Motorola had placed the Google Assistant button on the left, which is clean except for the triple-card slot. This button is placed very high, and most of the time, I would mistake it for volume up instead. 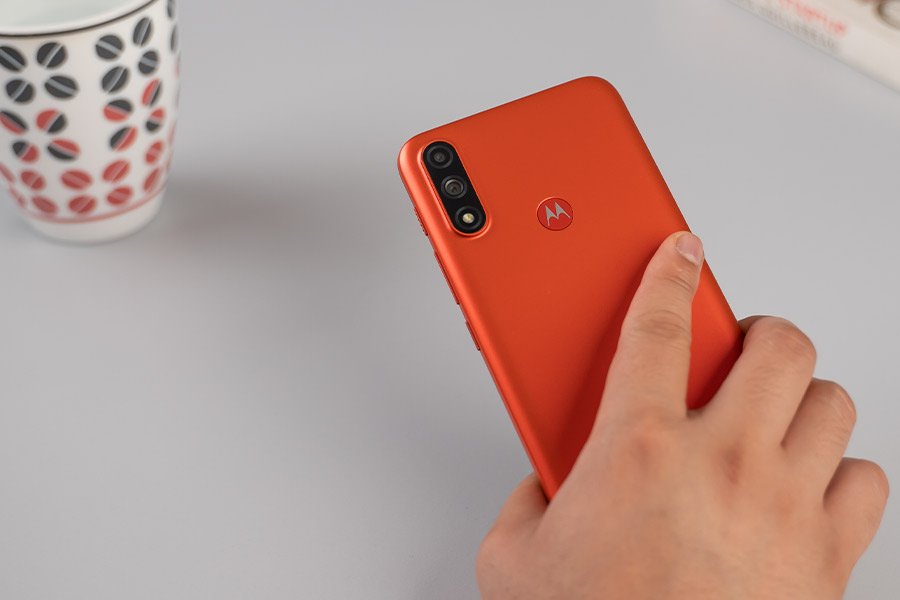 At the back, there is a left-aligned pill-shaped camera bump, a fingerprint scanner with the classic Motorola logo, and a speaker grille. The 3.5mm headphone jack is at the top, and Moto even includes a wired earphone jack in the box.

Similarly, the bottom side is home to the microphone and Type-C port. Both the in-box earphone and the Type-C port are quite rare at this price point, so kudos to Motorola.

Moto E7 Power features a 6.5-inch “Max Vision” display with a waterdrop-style notch for the selfie camera. The fact it is a budget offering is apparent with the thick bezels around the screen.

Coming to the panel, it is an HD+ IPS LCD screen, which is what most devices offer in this price range. There is an LED towards the left of the notch, which lights up whenever you receive a notification. The display produces saturated colors as the colors are set to Boosted by default. Having it set to Natural felt much better to me. Visibility becomes an issue when you take the phone outdoor, but not when indoors (which I expect you to be during the ongoing prohibitory order). The phone also has Widevine L1 certification, so that should help. That being said, I would have liked the display more if the viewing angles were a little better.

Moto E7 Power is powered by the MediaTek Helium G25 chipset that went official last year. Based on TSMC’s 12nm process, it features eight Cortex-A53 cores (@2.0GHz) and IMG PowerVR 8320 GPU (@650MHz). And right off the bat, is not the best silicon in the segment.

In fact, for the same price, you can get other budget phones with Helio G35, which is similar to G25, but with a higher clocked CPU and GPU. However, different brands have different takes on their devices. Here, Motorola prioritizes clean UI over raw power.

Though the phone has a higher 4/64GB variant, only the base 2/32GB model is available in Nepal. And the experience is not the best. It takes a while to open any app, and the phone struggles to keep the app in the background. So, multitasking is out of the question.

MediaTek promotes its Helio G-series as gaming-oriented because of the HyperEngine technology. Thus, we had to test few games on it. Starting with Call Of Duty Mobile, I will say that the game has not been optimized well for the device. You can only play in Low graphics settings. With the refresh rate set to High, the game was smooth except for occasional lags. PUBG Mobile, on the other hand, can run at Balanced graphics and refresh rate. The gameplay does not seem smooth, partly because of the supported refresh rate. That being said, I did not experience much lag as I did with COD. I also noticed that the phone starts getting warmer after 30 minutes of playing these demanding games. As a result, the games turn choppy.

Less-demanding games fare a lot better. I tried games like Clash Royale and FreeFire, and the experience was much better. The latter offered more graphics settings and was smoother compared to other aforementioned FPS titles.

Anyway, the software has been a great selling point for Motorola devices. Still, I feel like the company could have done better. For instance, it would have been a lot better if Motorola had opted for Go Edition instead of the full-fledged Android version, at least for the 2GB variant. Here, Moto E7 Power runs My UX on top of Android 10.

However, you do not get to enjoy much of the gestures and customization that My UX is known for. The ones that I could find on the phone were “Chop to open Flashlight” and three-finger screenshot.

You will not be getting any ads or shady notifications that you find on other “value-for-money” budget devices. There were no pre-installed bloatware apps either. You get all the Google apps, some of which can even be uninstalled (Home, Fit, Podcasts, One).

At the time of the review, Moto E7 Power is still on March’s security update. Unimpressive. And as with most phones under Motorola’s budget E series, this one is unlikely to receive any Android update in the future as well

There are three cameras on the Moto E7 Power, two on the back and one on the front. The rear camera setup consists of a 13MP primary shooter and a 2MP macro camera.

I would say the shots from the 13MP primary camera look just okay, but only when there is ample light. Still, the colors look off. The phone struggles with maintaining exposures and dynamic range.

The quality deteriorates as the day transitions into the night, and there is no dedicated night mode to help you either. The photos lack detail and are full of noise.

Coming to the portraits, they are decent for the price. The edge detection looks decent, and you can adjust the blur intensity before taking the picture.

You will notice a slight shift in the color tone of the subject when turning on the Bokeh mode.

Similar is the case with the 5MP selfie shooter.

The photos look whiter after turning on the portrait mode. Under normal mode, the images look smoothened and thus, lack detail when there is not much light in the surrounding.

Moving on, the shots from the 2MP macro camera lack detail and sharpness.

Therefore, it is there just to make up the numbers.

Moving on to call quality, I had no problem making and attaining calls on the Smart Telecom network. Both SIM card slots support Band 3 and Band 20, which are the two bands that our network providers operate 4G (LTE) on. Coming to the audio, the single speaker on E7 Power is moderately loud, but it sounds grainy. It is on the back of the phone where it’s most likely to be blocked by your hands. Thankfully, there is a wired earphone in the box that I found myself using most of the time because of the higher quality compared to the speaker.

Likewise, the battery is among the strongest suits of the Moto E7 Power. The 5,000mAh battery provided me a screen-on time of 7 hours on average. I used the device for things like YouTube, social media browsing, and light gaming. Therefore, on normal usage, it should easily last a day of usage. It is great to see Motorola offer Type-C charging on an entry-level device like the E7 Power. A 10W adapter comes in the box. Still, the phone takes an excess of 3.5 hours to go from 0 to 100%.

To conclude, Motorola has gone for the basics with the Moto E7 Power. The device comes with a sturdy yet elegant design with great battery backup and a clean, ad-free UI. Still, aspects like display, camera, and charging speed could have been better.

In addition, the 2GB RAM variant falls short on performance because of the chipset limitation and full-fledged Android. So, if you’re thinking of getting the phone, be sure to buy the 4/64GB variant.