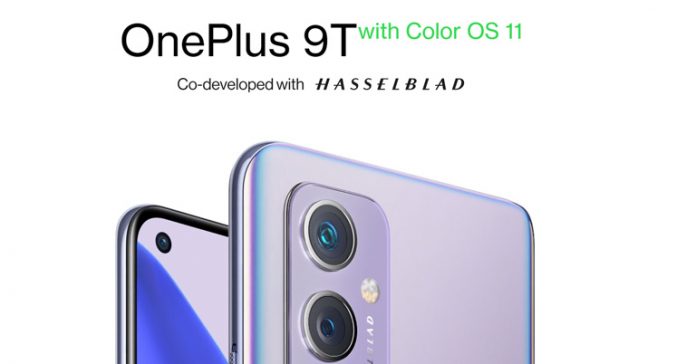 OnePlus is said to be working on a new smartphone called the OnePlus 9T. What’s intriguing in this year’s T-variant is that it can ship with ColorOS 11 pre-installed. So, let’s get into the leaks and rumors surrounding the specs and launch of the OnePlus 9T.

Per the tipster on Twitter, OnePlus is working on 9T 5G, which will arrive in Q3, 2021. Further, he has added that the handset will boot on ColorOS 11 (Global) and will retain the Hasselblad partnership in the camera department. However, it will feature a 108MP quad-camera setup compared to the 48MP  setup on 9 Pro.

As we all know, OnePlus phones in China run ColorOS by default, so it’s no surprise that the forthcoming 9T will use continue to use Oppo’s proprietary OS there. However, the tipster’s assertion that the handset will debut with the global version of ColorOS 11 appears to be incorrect, since the company has already confirmed that the global devices will use OxygenOS.

But, on the other hand, it’s quite unlikely for OnePlus and Oppo to use different OS after merging all of the other departments together. As such few have suggested that the two OS will gradually converge into one. If that’s the case, it’s likely that they will go with the OxygenOS moniker as it’s more popular than ColorOS in the global market.

Moving on, a Weibo tipster stated that the 9T will feature an LTPO Samsung E4 flexible AMOLED panel with a Full HD+ resolution and a 120Hz refresh rate. Although Qualcomm recently launched the Snapdragon 888+, the OnePlus may go with the regular 888. While firms like Asus, Honor, Motorola, Vivo, and Xiaomi have been rumored to be working on a smartphone with the new chip, the name OnePlus has not been mentioned here.

OnePlus recently made waves in the global smartphone industry when the company’s CEO Pete Leu announced that they will be integrating their teams with Oppo. Again, this came as no surprise given that OnePlus smartphones in China had already begun to ship with ColorOS. Furthermore, they formally announced a few days ago that they are also merging the OxygenOS and ColorOS codebases. The company has yet to make an official announcement on the existence or debut of the OnePlus 9T. However, speculations suggest that it will be released in September.