Buying a TV that perfectly matches your needs isn’t easy in 2021. While TV size, contrast ratio, backlighting are some common domains one looks into, there’s a ton of space left to consider before spending the cash for your living room set. The television industry, like the GPU biz, is experiencing worldwide raw material and chipset shortages. It led to the price increase in television, which did affect Nepal’s market as well. In the midst of all this, Panasonic has launched two new 4K TVs under its HX750 series. And, in this review, I’ll be talking about the Panasonic TH-55HX750 55″ 4K TV to find out if it’s a perfect choice to liven up your living space.

Starting with the design, the Panasonic HX750 has a kind of visual appeal that we find on premium televisions. The TV has a slim profile and sports narrow bezels on the front, giving it a classy look. The back panel is made of plastic and has a standard black color finish. However, no one would notice it, as it sits opposite the brick wall in your living room, and neither does it affect the viewing experience.

The TV sits on two V-shaped legs colored a similar black as the frame. But, Pansonic is ensuring better robustness with its metal pedestals, which none of the other brands offer, even in the TV that cost two-folds of HX750. While the stands are sturdy, the TV can also be wall-mounted, however, you didn’t get a wall-mounting bracket on the box. So, you need to purchase it separately, if you opt to mount it.

The TV is lightweight, weighing only 10.62 kg, making it easy to relocate from one room to another. Despite its slim profile, one can notice a slight bump on the back, which houses all the I/O ports. There’s one AV in, one Antenna, two USB 2.0, one digital audio out, and a LAN port. Similarly, there are three HDMI connectors, one of which supports ARC.

HDMI ARC eliminates the need for an optical cable by allowing audio to be sent from a suitable HDMI socket on your TV to a compatible soundbar or AV receiver. Not to forget, Panasonic has delivered the TV with an AV converter cable as well.

Heading to the display, it is a 55-inch 4K panel with HDR support for deeper darks and brighter brights. And it’s fairly obvious, in this price range, you didn’t get Dolby Vision support here. We conducted our set of tests, which included numerous 4K and 1080p videos, brighter/darker contents, HDR processing, and others to see how much the HX750 could wow me. And, at first glance, the visual quality was adequate from our vantage point. The 4K content looks fantastic, and it creates images that are rather detailed.

Moving on, a straightaway notice for me was the contrast level of the TV, which was considerably high on the default presets the TV wakes with. Thanks to the picture mode available on the TV, you can customize it as your necessity. There are five modes for your contextual viewing — Vivid, Standard, User, Movie, and Sport. In addition, it supports a 4K color engine that scales up HD/FHD content to offer detailed pictures.

The color engine also enhances the viewing experience by optimizing dark and bright areas to offer realistic scenes. So, if you’re wondering how it works, it performs better than I thought. There were no occasions when the TV’s algorithm exaggerated the color and temperature of the 720p/1080p content, which ultimately preserves picture details in the 4K screen. While we’re on the subject of viewing, the Panel’s viewing angle is also worth discussing. The colors are sharp from any angle on my sofa, and you don’t have to sacrifice on details of the pictures.

Now, getting into pictures modes, in Vivid, the contrast level, and picture saturation was a little high. Consequently, on default presets, the Vivid and Standard mode delivers over-darken content on Netflix. Moreover, Sports modes add a bit more sharpness to the pictures while the Movie mode has a warm effect.

However, there is a custom mode dubbed User that allows experimenting with the backlight, brightness, contrast, gamma, and other display settings to achieve the ideal result. In my usage, the backlight was set to maximum, while the brightness and contrast levels were kept at 55 and 45, respectively.

This is not to say that the Picture modes are nothing to give attention to. I enjoyed watching Ric and Morty on the default Movie mode; it’s quite an immersive experience. So, you should play with the settings according to the content playing on the panel. To note, while watching HDR material, the TV displays an HDR label on the top-left.

Now, if we talk about fast-paced content like cricket or football, the TV delivers a fairly good picture quality. However, there are only a few times when I noticed slight ghosting effects. Though, that’s not much of a big deal, as it’s unnoticeable most of the time. Moreover, the wireless connectivity on the TV works well. I was taken aback when the TV played 4K material without any buffering over Wi-Fi (most of the time). However, I did notice some slight buffering at times, so for consistent video play, I would recommend using a direct LAN connection. It will also make it easier to watch live cricket, football, or other sports tournaments without missing a beat.

Despite its many strengths, the TV falls short in one major area, which is backlight bleeding. The panel bleeds majorly on top, bottom, and left, however, one can notice it when you are watching content that is black around the corners but bright in the center. Even if you gaze straight at it, you won’t see it if you don’t know where it is. However, if you know where it is, it will always grab your attention.

When it comes to the UI, it’s quite familiar, simple, and easy to use. The TV boots on Android 10, which isn’t that much different from Android 9. In Nepal, however, most companies ship their TVs with Android 9, and Panasonic delivering the most latest OS is a step forward for everyone. It comes preloaded with Netflix, Prime Video, and YouTube, and you can get just about any other streaming app your heart desires on the Google Play store.

The Android OS is a full-screen OS, as opposed to Samsung and LG’s bottom bar interface. Thus, in order to select installed apps, you’ll need to go to the home screen or use Google Assistant, which works well for opening apps. The settings menu, though, opens as a banner on the right side of the screen, which kind of takes the full-screen, or at the very least to a context where you’ll have to pause the video.

Since Panasonic has well optimized the TV OS, there are no observable shutters when swiping over the widgets or shuffling between the HD channels. Regardless, the most substantial improvement Google has made in Android TV 10 is support for AV1 coding; nonetheless, the TV continues to use H.264 video compression. This might lead to an inefficient data compression capacity which might be a setback for many who relies on a volume-based data connection.

Over on the memory front, the TH-55HX750 packs 2GB of RAM and 8GB of storage, thus providing a snappy UI/UX experience. Further, you can customize the default home screen layout and as it has Android OS, it comes pre-installed with features like Play Store, Google Home, and Chromecast. The latter helps to easily stream content from your phone, tablet, or computer right to the TV. Surprisingly, the Play Store for the TV lacks a Spotify app, which may be a detriment to music fans.

It also has a Fast Boot option, which allows the TV to be opened in less than 2 seconds. When this mode is disabled, the TV takes approximately 38 seconds to boot up. The Fast Boot, on the other hand, is a power-hungry alternative to the normal mode, as it uses power in the background as well.

The Panasonic TH-55HX750’s remote isn’t as thin and light as those seen on Samsung, LG, and Mi TVs. However, this creates space for squeezing all of the essential buttons into the remote. However, expect a separate Netflix button; there are no buttons for YouTube, Amazon Prime, or other video streaming providers. So, settling on such a little thing isn’t the best decision for the company, at least not for me. 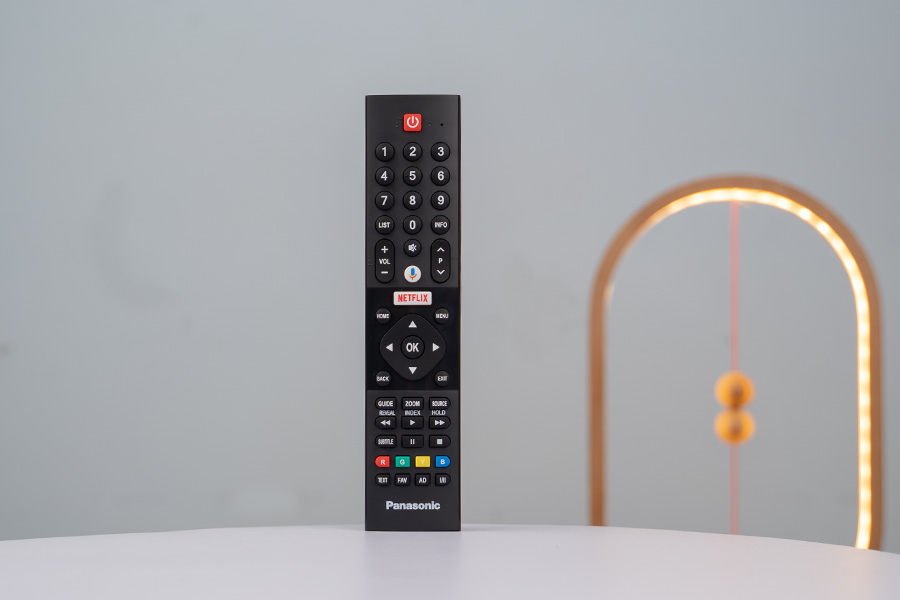 Furthermore, the remote also houses a Google Assistant button, indicating that the TV supports the Assistant as well. However, the Assistant did not function beyond simple toggles and searches throughout my testing. It means that you cannot modify any of the control settings of the TV from it.

Also, the assistant didn’t always work well for me, as she frequently failed to recognize my voice. However, following a hard reboot, everything gets back on track. But, as it does not permanently resolve the difficulties, you must repeat the process whenever you experience such problems. The TV also includes a built-in Chromecast, which functioned well most of the time but occasionally experienced connection difficulties. This isn’t a major deal because it can be easily rectified in future updates.

In terms of Audio, it comes with 20W bottom-firing speakers. Just as the different Picture modes, it has four Sound modes to choose from — Standard, Music, Sports, and Movie. Additionally, you get DTS Audio support as well.

Speaking about its quality, the Standard mode delivers a balanced output while Music mode tries to accentuate human voice while dimming the instrumental noise. On the other hand, if you want overall good quality audio, I would recommend turning on the DTS option. In this mode, you get clear audio, while the bass level is maintained too.

However, if you are a music enthusiast who appreciates rich sound quality, I would recommend using an external home theater system or soundbar. For this, you can connect the sound systems to the aforementioned HDMI ARC port.

Summing up this review, the Panasonic TH-55HX750 55″ 4K TV is an excellent choice for anyone seeking a premium TV experience. From design to snappy UI experience and wide viewing angles, everything is well maintained here. However, the screen suffers from considerable backlight bleeding. If it isn’t a big deal to you, I would certainly recommend this TV to liven up your living space.

In total, the TV’s test results are a mixed bag compared to other models we have tested, but the average viewer won’t pick up on the shortfalls. However, if you’re purchasing the TV for fantastic picture quality, OLED should be the way to go.