In this Python at RabinsXP, we are going to learn everything about the strings such creating, printing, indexing, and slicing, etc. We also learn about its properties, methods, and formatting.

In Python, Strings are used for storing the text information such as a name which actually is treated in a ‘sequence. This means every element in the string can be track backed by Python.

For example, if we provide a string as “Hello World”. Then it is stored in the sequence of the letter in a specific order. i.e using index we can get the particular letter from the “Hello World” in the sense that if we grab index[4], it will give us the letter ‘o’ which is at the fifth position (or 4th index).

In Python, we use “double quotes” to represent a string. ‘Single quotes’ can also be used,

Now make sure not to use words like I’m, You’re, He’s,  She’s, etc. You may notice these words already have the symbol ( ‘ ). This will lead you an error if you give something like this to the string: ‘She‘s is an actress.’ Instead of this, we can simply use both types of quotes like this. “She‘s is an actress.”

We can output the string using REPL (read-eval-print-loop) but a proper way to do is execute or display is using the print function. REPL is a shell interface that reads each line of input, evaluates that line, and then prints the result.

To find out the length of the string, we use the function len()  Example len('Hello Users') will count the numbers of string character and prints it.

As we already know that Python stores string in sequence. We know strings are a sequence, which means Python can use indexes to call the parts of the sequence. Let’s learn how this works.

In Python, we use brackets []  to call any index of the object. As most of the programming languages, Python also starts with zero (0) index.

We will learn this using an example.

Now we print the object.
print(a)

a[0] shows the first element (H) assigned to the letter a.

a[1] shows the second element (e) assigned to the letter a.

a[2] shows the third element (l) assigned to the letter a.

a[3] shows the fourth element (l) assigned to the letter a.
and so on…

Now using the symbol colon (:) or scope we can grab the parts of the strings. Here grabbing the certain part means ‘slicing’ in terms of Python just like we slice only some piece of an apple to eat (not all).

We knew the length of the string previously using the function len(a). Now, let’s slice the string stored ( i.e ‘Hello World’) in many ways.

a[1:] It grabs from the first index to the last index. i.e Hello World

a[:4] It grabs from the first index to the fourth index. ie. Hell

Note, in python, [:4] means from this up to that, but not including that, means in the above example, from index one, up to index 4, but not the index 4 itself.

Last letter (one index behind 0 so it loops back around)
a[-1] It grabs only the last letter or last index.

# Grab everything but the last letter
a[:-1] It grabs everything from last to first but excluding the last index.

Now making use of both index and slice notation (scope) we can now grab elements in the desired sequence.

Say we can grab specified step size (the default is 1). For instance, we can use two colons in a row and then a number specifying the frequency to grab elements. For example:

a[::-1] It grabs everything backward but goes in steps size of 1.

Python strings are immutable that means once assigned it can’t be changed or replaced.

As we have assigned a= ‘Hello Strings’ already now if we try to change the word ‘e’ with ‘3’ like below we get an error.

a[1]='3' This gives an error messages stating we can’t change the item assignment.

But we can do Concatenate strings.

Concatenate means joining together in series. Python allows concatenating two or more strings. Or let’s say adding more to the already defined string. We can do like this.

We can concatenate ‘n’ number of times or repeat it using the multiplication symbol (*).

Python has some reserved strings method. These built-in methods are the functions inside the object which performs specific actions on the object itself.

In Python, the method names are called using the full stop or periods (.). The basic syntax is:object.method(parameters) The parameters are the arguments we can pass to the method.

Here are the major built-in string methods used in Python.

In Python, we use the .format() method to add formatted objects to printed string statements. We can insert another string with curly brackets {} and join it with new string format method. Here’s an example of how to do this.

The few more examples can make you easier to understand.

We now know who to create, print, index, and slice the string in Python. We also know understand the string properties, built-in methods, and print formatting the strings. This concludes the end of ‘Strings in Python’.

Next, in the Python programming series (Python at RabinsXP), we will learn about Lists in Python. 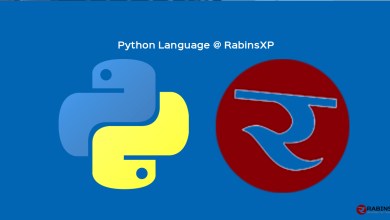 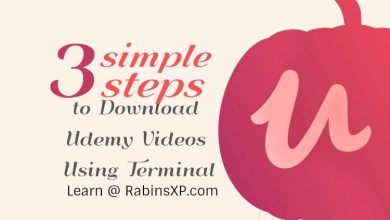 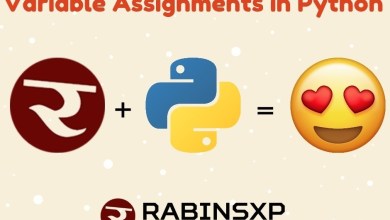 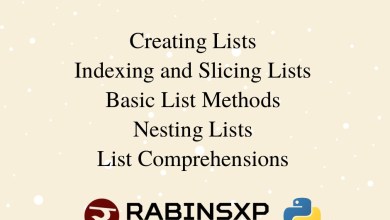