Realme introduced the Narzo 30 series via an online event in February. However, only the 30A and the Pro model was launched back then with the regular Narzo 30 saved for a later date. The “later date” could just be around the corner as the device has been part of multiple listings and leaks. In this post, we will be rounding up all the latest rumors and leaks surrounding the specs, features, and availability of the Realme Narzo 30.

Narzo 30 is a 4G device while the Pro model is the first 5G-capable smartphone in Realme’s Narzo lineup. The Narzo 30 will be positioned between the 30A and 30 Pro. It will come in both 4G and 5G variants. The original plan was to launch only the 4G model so the 5G variant here is a sort of afterthought.

The 4G variant of the Narzo 30 was recently spotted in a Geekbench 5 listing with the RMX2156 model number. The listing shows that the phone will be powered by MediaTek Helium G95. It’s the same chipset that was used in the recently launched Realme 8 and last year’s Narzo 20 Pro. The phone has managed to score 517 and 1682 points in single-core and multi-core tests. 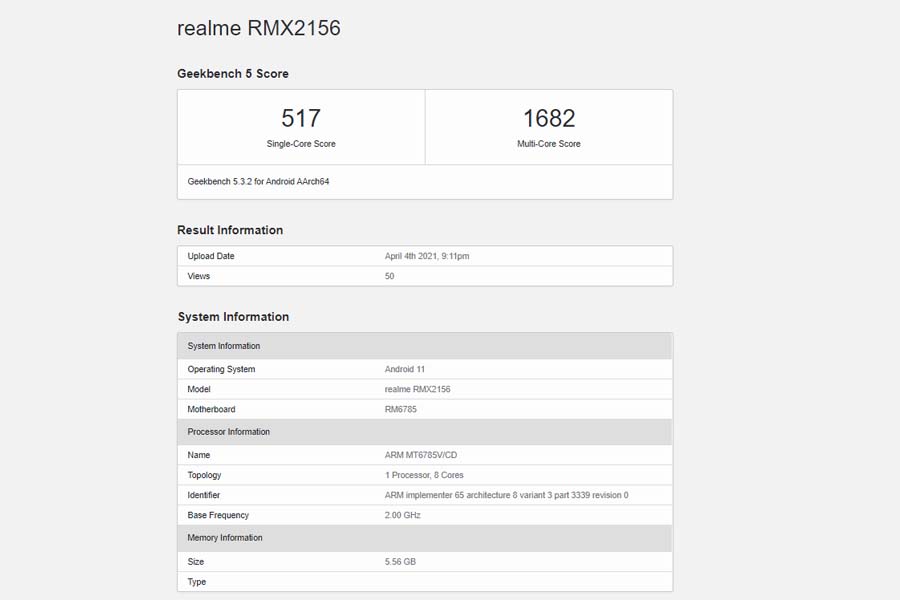 Earlier, the design of the phone was leaked by a Twitter handle by the name Paras Guglani. The leak suggests that the phone will have a left-aligned punch-hole cutout for the selfie camera.

At the back, there is a rectangular camera module enclosing three camera sensors and an LED flash. The module is slimmer than that of the Pro model and the LED flash is positioned vertically below the latest sensor instead of on its side. The phone also seems to sport a “split-design” with a reflective stripe running down the length of the device via the camera module. As for the battery, the device is said to be fueled by a 5,000mAh cell. It will support Realme’s 30W Dart Charge technology.

Narzo 30’s 4G variant was already in the testing phase even before the release of the Realme 8 series. However, since the device has been listed in different benchmark and certification listings, we expect Realme India to announce the device soon.