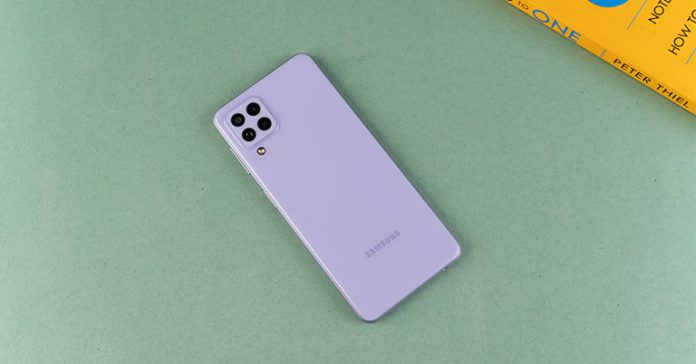 Samsung has launched three eerily similar midrange phones this summer – the Galaxy F22, Galaxy M32, and the Galaxy A22 which has 2 variants: 4G and 5G. In this review, I’ll be discussing the Samsung Galaxy A22 (4G) at length. This phone belongs to the company’s A-series of devices, so it’s a better-looking of the three—and emphasizes better camera performance too.

On the other hand, Galaxy F22 is the most affordable among them and is probably a better value for money as well. Likewise, the Galaxy M32 is your typical M-series phone from Samsung with a big battery.

I had the Violet color option during my hands-on review which looks stunning. There’s also a Mint variant that looks equally good. Likewise, Galaxy A22 comes in a Black finish too, which I’ve been testing. As you could tell, this one’s probably the safest option of the three, although it does attract a lot of fingerprints and smudges.

Regardless, the design is something that you will like about the A22. It looks and feels much better than the boring-looking F22 and M32. Its build quality is also pretty rigid, despite the plastic back and frames.

Over time, our unit has suffered some scratches at the back, so you’ll have to be extra careful when using the phone—or just slap on a case to be safe. Moreover, Galaxy A22 is also incredibly light at just 168gms and we’re fond of its even weight distribution as well.

So, one-handed usage is actually very good on this device, especially since it’s complemented by Samsung’s One UI, which is extremely one-hand friendly. Here, the fingerprint sensor, which doubles as a home button, is embedded on the right frame of the phone. It is located just in the right position for your fingers to reach to and unlocks the phone swiftly.

Moving to the front, A22 doesn’t boast an impressive spec-sheet in terms of its display. It comes with an outdated teardrop notch and on top of that, features an HD resolution. So, if you compare it side-by-side with the Full HD panel of the M32, you will definitely notice the lack of sharpness in the texts and app logos. 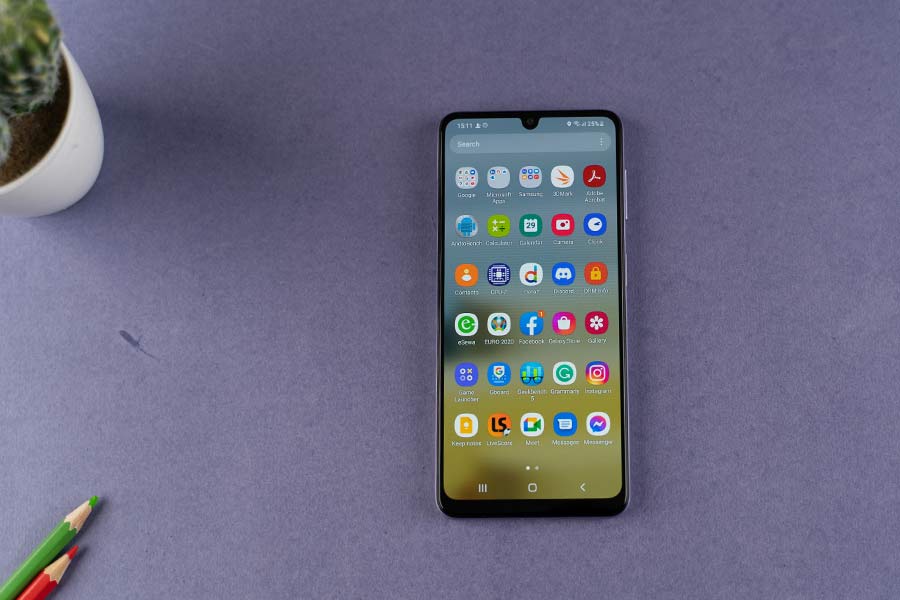 But I think most of us wouldn’t find it to be much of a dealbreaker since this is a quality AMOLED screen. The colors look good, the touch sensitivity is great, and with the 90Hz refresh rate that’s well-optimized for the most part, it’s not a terrible display to look at—despite the spec-sheet painting a different picture.

Brightness-wise, it is obviously sufficient indoors although we found it to be struggling to maintain visibility while using the phone outdoors on a bright sunny day. In comparison, the M32’s display is slightly brighter. However, the ambient light sensor works quite slowly here. So, whenever I’m outdoors and I want to check for a message, it has been somewhat of a frustrating experience.

Plus, although the phone is Widevine L1 certified, the Netflix app only shows L3 certification, and videos are played in 580p SD resolution only. I hope Samsung solves this nuisance via a software update pretty soon.

Additionally, the mono speaker on the Galaxy A22 isn’t that good either. It is okay for watching YouTube videos and such, but if you are a serious audiophile, you will miss the depth and details that we usually see on upper midrange and premium phones these days. 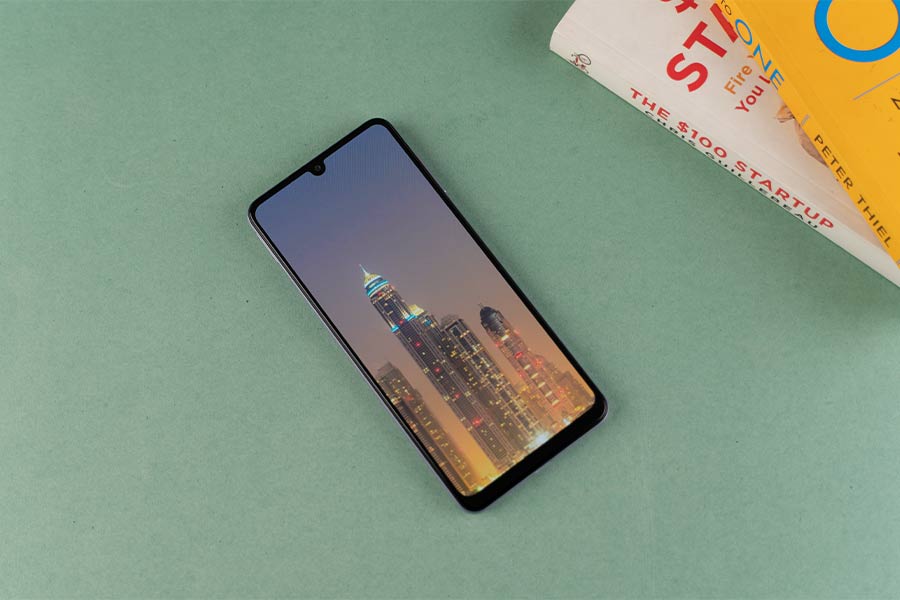 Then again, we have to factor in what Samsung’s asking for this phone before expecting too much.

Anyway, I was also expecting its performance to be subpar just like with the M32 since it’s the same Helio G80 chipset and eMMC storage running the show. Surprisingly enough, I found the A22 to be comparatively more fluid and faster than the M32. It’s probably because the G80 is more efficient to run on an HD display than a Full HD one.

Here, multitasking between a few light apps is great too, and Samsung seems to have optimized apps to load a bit faster than the M32 on most occasions. Plus, the 90Hz refresh rate works like a charm and you will not notice any micro lags or such either. Still, like the M32, the A22 also comes with eMMC storage, so loading up apps in memory or installing them isn’t as fast as you would expect from a phone in this price range. Also, if you play a lot of games, you should be staying away from Samsung’s mid-range phones including the A22.

In our test, we were only able to get like 30fps in PUBG Mobile under HD graphics and High frame rates. This result is the worst fps-per-rupees on a smartphone, to be honest. Dialing down the settings to Smooth graphics and Ultra frame rate does result in a slightly better 38fps average though.

Still, it goes without saying that Samsung should have included a more capable chipset here. Talking more about gaming, as you can see from this chart, relatively less demanding games like COD run at 60fps with 98% stability, whereas higher fps-optimized games like Critical Ops and Mortal Kombat do not hit the 90fps mark and rather max out at 80fps. The reason this phone can’t high a higher fps mark is most definitely a hardware limitation. Moreover, Galaxy A22 simply doesn’t stand a chance when playing even more graphically demanding games like Genshin Impact. It struggles to deliver the slightest hint of playability even when tuning down the graphics quality to its lowest and turning off other visual enhancements.

Okay, let’s now move to the cameras. As we know, this is where Samsung‘s midrange phones usually have an edge over the ones from other brands. And the A22 is no exception.

But for this review, we tested it out against the company’s own Galaxy M32 and found that A22 shoots sharper photos in most scenarios thanks to OIS.

However, after the recent update, both of them produce nearly identical colors and contrast levels.

Regardless, ultra-wide-angle images aren’t that good as they’re lacking in details and come out relatively darker when compared to the primary images.

We also found A22’s portrait photos to be slightly better than those from M32, although the difference is marginal only.

Overall, portrait images are quite good on both these phones.

Yet, there’s some issue with A22’s selfie images as they are not as sharp as the M32’s and come out looking soft.

But, I think this is more of a software issue because it happened only after a software update.

Likewise, thanks to the OIS, nighttime images have better sharpness and details on the A22, and it also does a better job with the Night mode turned ON.

Plus, the videos come out much stable on the A22 while M32 shoots jerky and wobbly footages. But, because of the Helio G80’s limitation, you can’t capture 60fps or 4K videos here either.

Lastly, the battery life on the Galaxy A22 is excellent. Its endurance is almost as good as the M32—maybe still slightly better on the M32. We constantly managed to get around 7 to 8 hours of screen-on time under heavy usage that involved at least an hour of gaming, watching YouTube videos, and using mobile data whenever we were out. So, it’s easily a day-and-a-half worth’s of endurance.

Additionally, even in this summer heat, we didn’t notice the phone get warm, which is something I really like about Samsung’s mid-range phones. You see, the company’s S-series is quite toastier, but the mid-range phones are not—and that’s most likely because of the low-powered SoC underneath.

Anyway, charging this phone is fairly fast. While we’ve been accustomed to crazy high-speed charging, sadly, the Galaxy A22 only supports up to 15W of power. Unlike the cheaper F22, it doesn’t support 25W super-fast charging either.

So, let’s wrap up this review of the Samsung Galaxy A22. Should you buy it? I think the answer is region-specific. That’s because the A22 costs the same as the M32 here in Nepal, so in this case, my recommendation would be to go with the A22 because it’s better-optimized, has a better camera, and more importantly, it feels like you are holding a premium phone. However, if you are living in India, the A22 at INR 18,500 is a bit on the expensive side which makes it an easy no for me. Plus, Samsung has also launched the costlier 5G variant of A22, which is even more ridiculously priced.

And like I said in my Poco M3 Pro review, the sad truth with almost every mid-range 5G phone right now is that they are priced quite absurdly and you might want to skip them until and unless you absolutely want 5G.