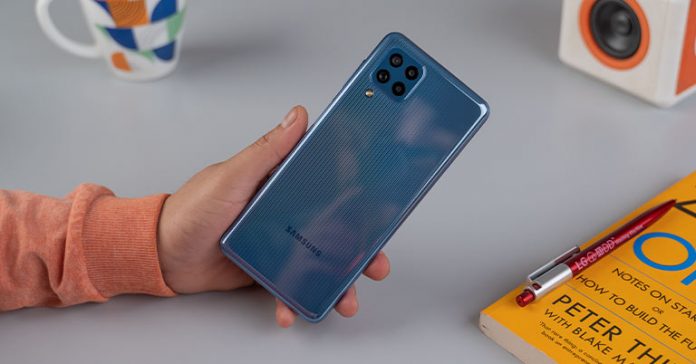 Today, I have the new Galaxy M32 with me. It is Samsung’s latest midrange phone and the successor of the popular Galaxy M31 from last year. Having used it for a little while, here are my early impressions of the new Samsung Galaxy M32.

Anyway, here I will talk about my first impressions of the Samsung Galaxy M32. I have only used it for few hours and the first thing I’ve noticed is how its design has seen a healthy upgrade over its predecessor. 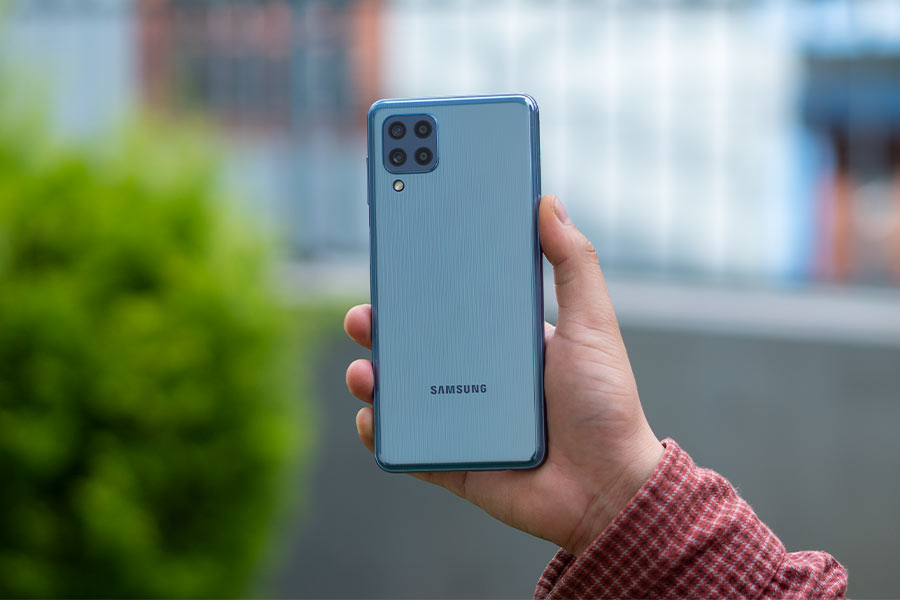 Compared to the boring look of M31, Samsung has introduced some good visual rework here. It feels more like a smaller and compact variant of the Galaxy M62. The back and frames are still polycarbonate, but I like what Samsung has done with these vertical lines at the back, this refreshing blue color option, and the relatively modern-looking camera layout too.

Plus, despite featuring a big 6000mAh battery, it doesn’t feel that heavy or bulky to hold. Weighing less than 200 grams, its build quality is pretty ergonomic as well. Likewise, the rear-mounted fingerprint sensor from the M31 has been moved to the side. And as expected, it’s a reliable one. It sits just below the volume rockers and so far, I’ve had no issues here.

As for the buttons, they are plasticky but give good tactile feedback. On the left, you get a SIM tray that can fit dual 4G SIMs and a dedicated microSD card. Over on the bottom, there’s a 3.5mm headphone jack, a USB Type C port, and a speaker grill.

As always, Samsung has included a good DAC with the 3.5mm jack. Hence, the audio output on my AKG earphone was loud and clear. However, the speaker here is only mono, and seeing how companies like Xiaomi and Realme are offering stereo speakers at this price, I think this is a big miss for Samsung.

Anyway, the display department is where Galaxy M32 has a bigger edge compared to the competition. Here, you get a 6.4-inch FullHD+ AMOLED screen with a 90Hz refresh rate, which none of the brands are offering at this price. In my brief time with the phone, I’ve liked the quality of the screen. As you would expect from a Samsung OLED panel, it has excellent contrast with accurate colors. Plus, it can get plenty bright too. The one complaint I have with this display so far is that Samsung has implemented a notch for the selfie cam instead of a punch-hole cutout. Therefore, Galaxy M32 does feel a bit outdated in this regard.

Similarly, this 90Hz panel doesn’t feel as smooth as say, the OnePlus Nord CE and that’s probably because of the midrange Helio G80 chipset powering the phone. Although the UI transition is smooth and all, I have noticed micro lags here and there on the M32.

Additionally, you can expect the overall performance of this Helio G80-powered phone to be sub-par in contrast to the competition like Redmi Note 10S or the Realme 8 that boasts a much more powerful Helio G95 chipset.

Also, the phone has eMMC storage, which is relatively slower than the UFS 2.1 standard that you typically get on phones at this price bracket. With the eMMC storage, everything from installing apps to opening them is slower and time-taking here. However, this is a chipset limitation entirely so Samsung’s silicon choice is to blame here.

Moving on, I also played PUBG Mobile for an hour or so on the Galaxy M32 under Smooth graphics and Ultra-frame rates. Surprisingly enough, I was able to achieve a stable 40fps gameplay. However, the graphics side of things still doesn’t compare to the ones from SD 732G or Helio G95-powered phones.

How are the cameras?

Camera-wise, you get a quad rear camera setup on the M32 which includes a 64MP primary, an 8MP ultra-wide-angle, and a couple of 2MP sensors for depth and macro shots. After clicking some photos, I could easily notice how good Samsung’s optimization is.

You get detailed yet slightly saturated photos with excellent focus and dynamic range. Images from the 8MP ultra-wide-angle sensor have a slightly inferior dynamic range and details, but it looks better than the competition.

I also like the portraits taken from the M32. They are lively with good subject focus and background blur.

As for the selfie, you get a 20MP shooter, which seems like a downgrade from the M31 that had a 32MP lens instead. Like with the back camera, the selfies have good colors, skin tone, and dynamic range.

My only major complaint with M32’s camera so far is its videography abilities. While Galaxy M31 was capable of up shooting up to 4K 30fps videos, M32 is limited to recording 1080P and 720P videos at 30fps only. Plus, it doesn’t seem to have a good enough stabilization either.

Despite this, another highlight of this phone is its 6000mAh battery. But I feel like it won’t have as good endurance as the M31 because the 12nm Helio G80 isn’t as energy-efficient as the 10nm Exynos 9611 chipset that we saw on M31. Samsung has added 25W PD charging support here although you only get a 15W power adapter inside the box.

Overall, just like the M31, the Galaxy M32 looks like another solid midrange phone. Having said that, performance isn’t its strongest suit and if you are an avid gamer, there are better alternatives to shop for. Still, if you prioritize multimedia consumption and camera performance above everything else, the Samsung Galaxy M32 might just be the right phone for you.