The worldwide smartphone market recorded approximately 355 million shipments in Q1 2021, according to Counterpoint Research. Samsung is at the top with a 22% market share, followed by Apple‘s 17%. Meanwhile, Xiaomi takes the bronze medal with 14% market share while Oppo, Vivo, and Huawei have 11%, 10%, and 4% market share, respectively. 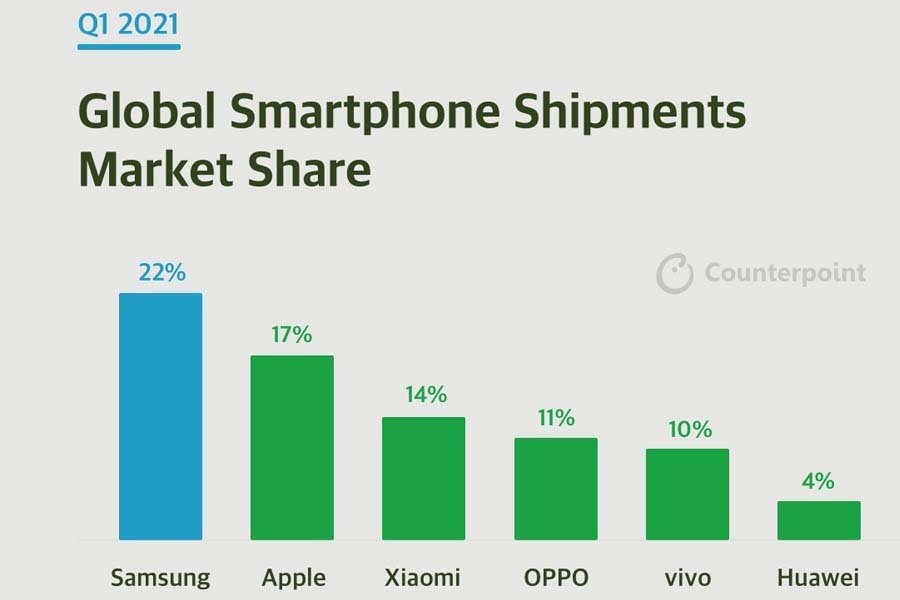 Surprisingly, even after being enlisted in USA’s Entity List, Huawei has still managed to be on the list with 4% of the global smartphone shipment. Samsung was able to regain its number one status, due to low iPhone shipments in North America and Europe.

In North America, nevertheless, Apple is still leading by 55% market volume, while Samsung covers just 28%. Global smartphone shipments decreased by 10% on a quarterly basis compared to Q4-2020 but grew by 20% on a year-over-year basis. The increment in smartphone shipment could largely be due to an increase in remote working and online education.

Xiaomi continues to be at the forefront in the Indian market with a 26% share of total smartphone shipments, while the Asian region is dominated by Vivo with 18% market coverage. As per Counterpoint, Xiaomi has seen an 8% YoY increase which is driven by the Redmi 9 series. The market share for Apple and Samsung in Asia is just 12%.