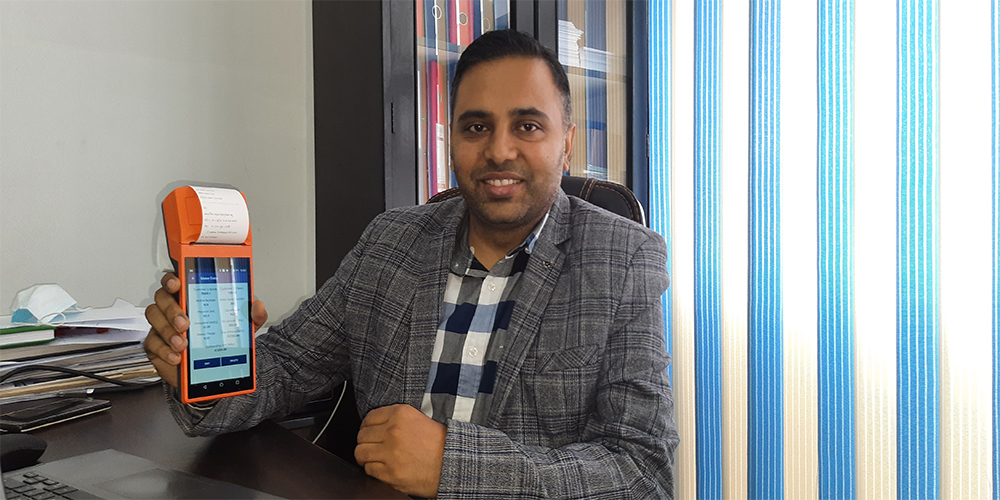 Spread over a large area, this place is as beautiful as drinking water management. The drinking water office was in a corner. Not only to pay the bill, there was no water, some consumers had to go by bus for an hour to complain if there was any problem. Car rental expenses and also have to wait in line at the office.

Consumers were fed up. “We are very embarrassed, we need an office to pay the bills,” the consumer demanded.

At the same time, the office chief engineer Shiva Amatya got a call. We have developed the technology to pay the drinking water bill online, ‘said the caller,’ not only paying the bill, but all the work of the consumer can be done through the software in the office. ‘

Lekhnath drinking water was like finding a god while searching for a stone. “That’s what we’re looking for,” Amatya said on the phone.

This is the year 2071. Dayalo Technologies had developed a technology for drinking water consumers who can pay their bills online and the drinking water company can provide all kinds of services through software.

At present, 14,000 consumers of Lekhnath Drinking Water Corporation do not have to go to the office to pay their bills. Not only that, why there is no water in your tap, how much is your bill and even there is a facility in your mobile to keep complaints.

“The obligation to spend Rs 80 on drinking water for three hours has come to an end,” says Amatya. “Now, 75 percent of drinking water bills are being paid online by consumers.”

Not everyone knows how to use a mobile phone. Older people at home and those close to the office come to pay the bills themselves. Besides, everyone is paying bills from various payment service providers including ISEWA.

“Our target is 95 percent,” says Amatya. “We are on the same path.” Lekhnath Drinking Water Office has been fully digitized. All consumers are connected to this software. On the one hand, work is being done in the office through software and on the other hand, there is a separate mobile app for Lekhnath drinking water consumers.

From which all the work related to drinking water can be done. If there is no water, there is a meeting, there is a problem or any information of the customer reaches the consumer from the same app.

The notification comes in the consumer’s app. It’s been three years since this app came into operation. So far, 500 people have downloaded it.

Lekhnath is just one example, which has been using this smart technology since 2071. To date, this technology of Dayalo Technologies has been implemented in 250 drinking water institutions in 50 districts across the country. More than 600,000 customers (households) of these organizations are availing various facilities by connecting to such digital technology.

The number of users using this software and app is increasing day by day. Smart drinking water is being developed by replacing the traditional working style and use of dhadda in the drinking water sector of the country.

What is this technology that is digitalizing the drinking water sector? This has been explained to us in detail by PR Khanal, Chief Executive Officer (CEO) of Dayalo Technology.

In the year 2070 BS, Dayalo Technologies conducted a detailed study on how the drinking water sector is operating. There are many problems in drinking water committees and institutions across the country.

Most consumers were hit. Even paying a small bill can take days, time, and money. All the work of the drinking water office was going on in Dhadda. Equality was equally important.

It was difficult to give small information to the consumers. If you have to hold a management meeting, you have to do 15 days of homework. It took 15-20 days for three or four staff members to prepare to see how much is in arrears and how much is in stock.

Dayalo Technology concluded that such a chaotic drinking water sector can be greatly improved. Developed the technology to digitize this area and do everything online.

This technology of Dayalo Technologies on the one hand is digitizing hundreds of drinking water institutions across the country, on the other hand it saves time, transparency and speed up work and on the other hand is relieving a large number of consumers.

“We have created an ERP (Resource Plan Platform) system in the drinking water sector to make it easier for the general consumer if drinking water services are digitized,” said CEO Khanal.
watermark

Watermark is a software that is fully digitized by the office of the Drinking Water Institute. Khanal said that it has 10 modules, i.e. various features under 10 titles.

It is primarily a billing, accounting and stock management software. It can also be understood as a technology to make all the works, branches and departments of the Drinking Water Office run on software.

It also includes individual distribution of lost drinking water to consumers. When you put this software, it is connected to Financial Services, PhonePay. The bill can be paid from this.

Khanal says that this technology is currently being used by 250 drinking water committees or organizations across the country and is connected to 600,000 consumers of these organizations.

“We have standardized drinking water. From the first accounting, everything was of its own kind, we belong to the standard system, ‘says Khanal. Another important thing is that after installing this software, consumers will be able to make online payments from home.

Dayalo Technologies has developed a dedicated mobile app for consumers along with software for drinking water companies. Metermark is a mobile app that can be metered.

The app is communicating between the committee and the consumer. Consumers can find out from the app how much water has been spent, how many numbers have been read, how much money has been raised. The water did not come with the information, they can complain about it.

Some large organizations are also using this dedicated app. So far, this app is being used by 15 big drinking water companies like Lekhnath. As many consumers are running this app, they are getting a lot of benefits, said Roshan Gautam, Dayalo Technology Marketing Sales Manager.

“We are reaching out to drinking water consumers,” said Gautam. “Many organizations and consumers are happy with this app and software.” Gautam said that many other organizations are showing interest in this app.

The app is named after the consumer committee and the user downloads the app of their organization. After the onset of corona infection, meter reading could not be done in some parts of the country.

At that time, the consumer had paid the bill by looking at his own meter. For this, you have to type the number on the meter and also take a photo of the meter and send it. It is calculated in the office.

The meter reader did not have to reach every house. This feature was started in the previous lockdown. The Nepal Electricity Authority had also started similar technology.