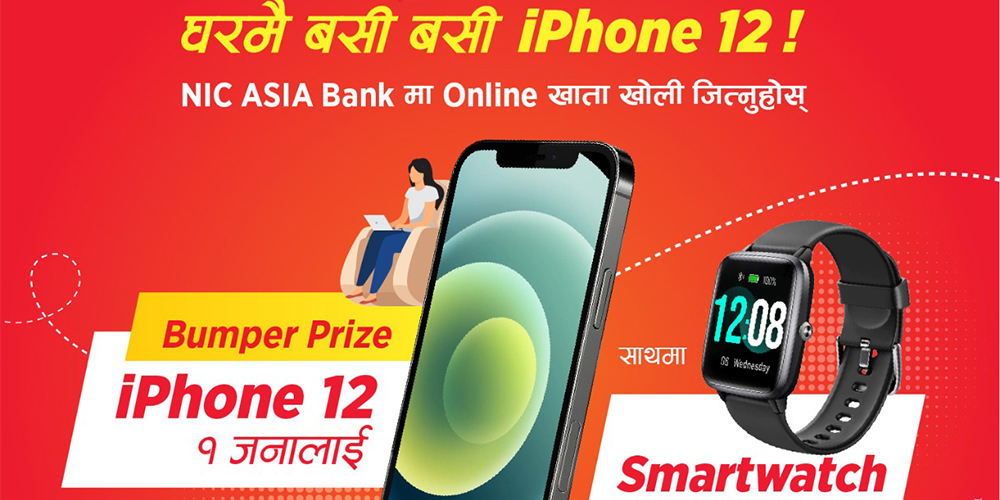 Sudiksha Thapa of Sarlahi, who opened an online account in the shortest time under the scheme, has managed to win an iPhone-12.

Thapa won the iPhone 12 by opening the account in the shortest time of 1 minute and 10 seconds out of the total 158 eligible participants in the competition which was held from 23rd June to 19th August.

Eligible participants can open an account from the bank’s website, share a screenshot of the online account process from step 1 to Summit, write a challenge acceptance in the comments of the pinned post on the bank’s official Facebook page during the competition period, tag the 5 friends and post the screenshot. After participating in the competition by mentioning the online account from the hashtag home and the hashtag NIC Bank in the timeline and liking the Facebook page of the bank and the paid post.

The top 10 participants who opened an online account in a short period of time during the competition period even managed to win a smartwatch, the bank said.

Among them are Maina Kandel of Rupandehi, Saurabh Dahal of Jhapa, Dinesh Maharjan of Kathmandu, Yuvraj Tiwari of Lalitpur, Raju Lama of Banepa, Sita Shrestha of Kirtipur, Samrat Bam of Dadeldhura, Kul Giri of Dang, Rabin Shrestha of Gulmi and Saroj Karki of Parsa.

Asmita Khatiwada of Kathmandu and Suraj Chand of Kanchanpur, Kusum Tiwari of Kathmandu and Dipshika Yogi of Dharan, Pramila Chaudhary of Birgunj and Pratiksha Chand of Mahendranagar and Sudiksha Thapa of Sarlahi in the fourth year (iPhone). -12 including the winner) and Mohammad Ali of Arghakhanchi have won the smartwatch.

The 18 winners had successfully opened an online account with a minimum of 1 minute 10 seconds and a maximum of 3 minutes 9 seconds.

All the winners of this competition will have to claim their prizes by contacting the official Facebook page of the bank within 7 days and contact the nearest branch office of the bank with full citizenship for signature verification of their account, the bank said.