Vertu is a luxury mobile phone maker based in the United Kingdom. It was founded in 1998 as a wholly-owned subsidiary of the Finnish smartphone maker Nokia. In October 2012, Nokia sold Vertu to private equity firm EQT VI for an undisclosed sum, while maintaining a 10% stake. Vertu has switched hands several times since EQT VI but hasn’t got the expected success in the smartphone industry. Here, we will be looking at the upcoming Vertu mobile phones in Nepal alongside their expected price.

After a brief introduction, let us discuss its formal launch in Nepal. Vertu’s phones have never made it to Nepal till now and the obvious reason is their exorbitant cost. However, Vertu-branded smartphones are now officially making their way in Nepal via Oliz Store.

For those unaware, Vertu’s entry-level product starts in the thousands of dollars and can even reach the five-figure mark. They are extremely pricey because of the precious materials and jewels used in handsets. Similarly, Vertu smartphones are handcrafted, which adds to their exclusivity (as well as the cost).

Before I list the smartphones, I want to point out that Vertu hasn’t released a smartphone in a couple of years. As a result, we expect that the firm will introduce its previous products in Nepal—whose specs are quite outdated for 2021.

Vertu’s most recent smartphone, the Aster P, was released in October 2018. Its body is made of titanium and sapphire glass. It has a 4.97-inch touchscreen display with a resolution of 1080 x 1920 pixels.

Qualcomm’s Snapdragon 660 octa-core chipset powers the smartphone. It has 6GB of RAM and 128GB of internal storage. Likewise, it runs on Android 8.1 Oreo and is backed by a 3200mAh battery. The handset is compatible with Quick Charge 3.0 fast charging. In terms of cameras, the Vertu Aster P has a 12MP camera on the back. It has a front-facing 20-megapixel shooter for selfies. When the smartphone was first released, the firm provided seven distinct color choices: Black, Gentleman Blue, Caramel Brown, Twilight Orange, Black Jade, White Moon, and Dazzling Gold. Aster P has dual gliding layers at the back which mimics the doors of a Mercedes SLS.

Next is Vertu Signature Touch. The phone comes with a 5.20-inch touchscreen display with a resolution of 1080 x 1920 pixels at a pixel density of 428 PPI. Under the hood, it is fitted with an octa-core Qualcomm Snapdragon 810 processor paired with 4GB of RAM and 64GB storage. The construction material used on the body is a leather cover, a single piece of 130-carat sapphire crystal, and Grade 5 Titanium. Similarly, in terms of the camera, it houses a 21MP lens on the rear and a 2.1MP sensor on the front. On the software front, it runs on Android 5.1. The handset gets its power from a 3160mAh non-removable battery. The device is available in four color options – Gold, Black, Blue, and Red.

Moving on, the Vertu Constellation was first introduced in 2013. On the front, it flaunts a 4.30-inch touchscreen with a pixel density of 342 PPI. Powering the smartphone is a 1.7GHz dual-core Qualcomm Snapdragon processor. Over on the memory, it has 1GB of RAM and 32GB of storage. 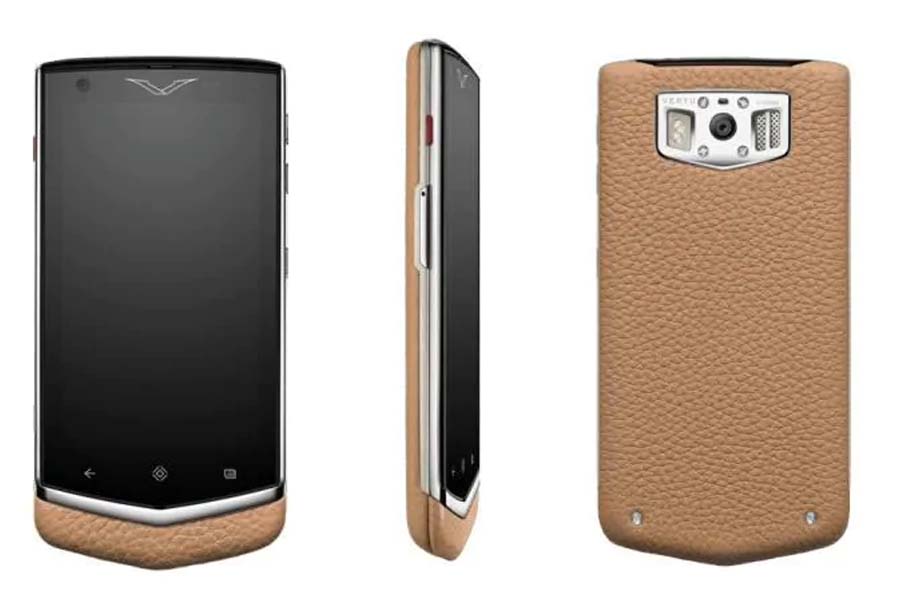 Moreover, the Vertu Constellation runs on Android 4.2 (upgradeable). Fueling the handset is a 1800mAh non-removable battery. It has a 13MP lens at the back while a 1.3MP lens snaps the selfies.