The last phone in the Mi Mix lineup was the Mi Mix 3 5G, which was launched way back in 2019. After a long gap, Xiaomi will finally launch a phone in the series in 2021. Today, we will take a look at what to expect from the upcoming Xiaomi Mi Mix 4.

Unlike the Mi lineup that is more of the mainstream flagship device, the Mi Mix lineup is more about innovation. Take the Mi Mix Alpha as an example. The device with a one-of-a-kind wrap-around screen was announced in 2019, and only a handful of them reached the public eye. The Mi Mix lineup had commercial flagship, too, the last one being the aforementioned Mi Mix 3 5G from 2019. The regular Mi Mix 3 was launched even earlier in 2018. Here, we are looking at 3 years of gap between the Mi Mix 4 and its immediate predecessor.

According to a popular leakster Ice Universe, the Mi Mix 4 will feature an in-display fingerprint scanner. He also shared a picture of what the display would look like. Unlike the Galaxy Z Fold 3 renders from the same source, there is no trace of the camera in the Mi Mix 4.

This could mean that Xiaomi’s in-display camera technology will have low-light transmittance, which would affect the quality of the picture. On the other hand, it would look and feel better during everyday use.

To capture high-quality selfie pictures, Xiaomi will be limiting the screen resolution to FHD. The Mi Mix 4 will use a hyperboloid panel from Huaxing Optoelectronics. 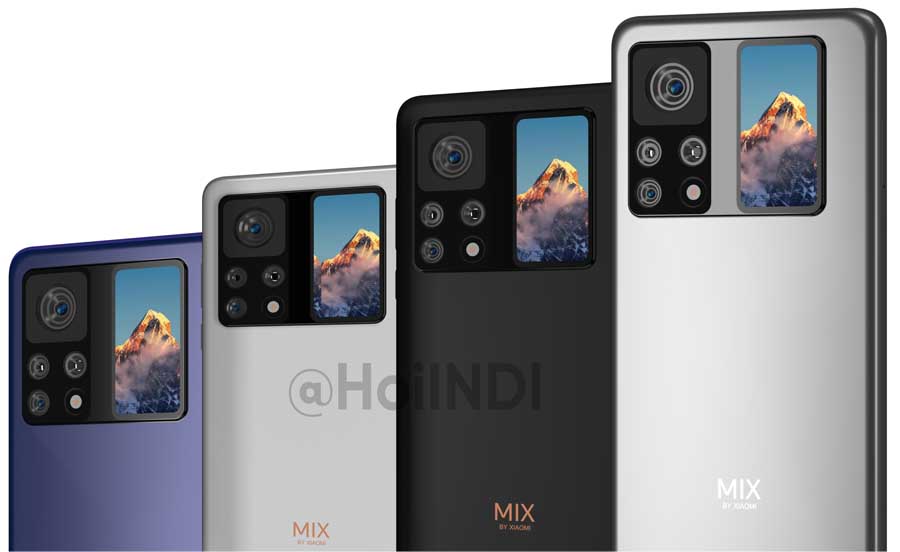 Renders from HoiINDI show a rectangular phone with rounded corners. There is a huge camera bump with a secondary screen at the back, like the one on Mi 11 Ultra, but larger. The rear panel also houses the MIX branding in golden letters.