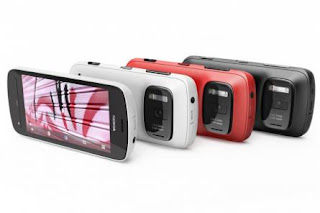 Here I’m gonna talk about a mobile phone which got 41 Mega Pixel of
camera. This 41MP Nokia Phone hit the market of Nepal thought the
authorised dealers of Nokia in Nepal; Neoteric Nepal and Paramount
Electronics haven’t offically launched this smartphone in Nepal. If you
are thinking is it legal sale or not? Now worries yet because this
phone, Nokia’s Lumia 808 PureView is being sold by the mobile sellers of
New Road and Durbar Marg importing stocks from thd Indian Market.
Traders said this Smartphone by Nokia had became popular among the
Nepali (Nepalese) Gizmo lovers.

The Lumia 808 PureView having camera sensor of 41 Megapixel is now seen
dominating Samsung’s Galaxy S3 and HTC One in the Nepalese market. Even
this smartphone got camera that is giving stiff competition to the
camera from brands like Canon, Nikon and Sony. For now lets see the
features or specimens of Nokia Lumia 808 Pure View below.

Talking more about this smartphone, 41 MP camera has features like Auto
Focus, Geo-tagging, Face Detection and Xenon flash. (Note: The price
listed above is in Nepalese Currency and may be different in the market
to the date. If you have any queries regarding this please feel free to
comment below and I’ll reply you soon).

Rabins Sharma Lamichhane is the owner of RabinsXP who is constantly working for increasing Internet of Things (IoT) in Nepal. He also builds android apps and crafts beautiful websites. He is also working with various social services. The main aim of Lamichhane is to digitally empower the citizens of Nepal and make the world spiritually sound better both in terms of technology and personal development.

This site uses Akismet to reduce spam. Learn how your comment data is processed.